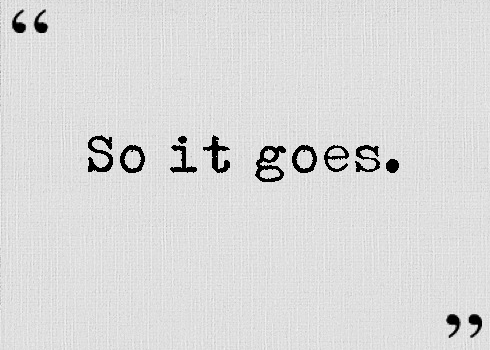 First off, thank you to the random person who followed my blog a few weeks ago (Emily I believe), reminding me that this exists and something needs to be done about it.  In case you have lost all belief in my writing, I would like to take a second and shed a little light on the fact that I gave an attempt to write a post this summer.  To make this anticlimactic…I have absolutely know idea where that post went and what it was about (facepalm to follow).

But, life has been quite exciting regardless.  This past summer, I worked at an amazing med-tech start-up company at the Fogarty Institute for Innovation in Mountain View California.  I published my first research paper (woo), had the poster presented at a conference, and learned that I am actually somewhat artistic (well…I can code and let computers do artistry for me; I suppose that’s how web development works…but check out my site!).  Then afterwards, my junior year of college started and well, as Vonnegut would say:

And to think all of this happened in such a short period of time is amazing and scary!  As you see from my lack of blogging, my memory can only handle so much…with so much occurring in our lives, you start to wonder how we remember anything!

So…because ya know…this is an engineering blog of sorts, let’s look into this whole memory thing.  And to help us, we’re going to use the work of Atkinson-Shiffrin’s memory model and look how it uses one of the core theories in engineering, called Control Theory.  Though it’s not the perfect model, it gives great insight into putting this engineering principle into good use!

So, if you feel like Louis above, we can actually make what I just said a little easier.  And you guessed it, we’re going to use control theory to do it.  Control theory is simple.  The basic idea is an input is taken into some sort of “black box” system (a thing that changes the input), which creates an output.  This output is then also placed into a new system, which somehow measures information about what the intended output was supposed to be based upon the input that was given.  It then relays this information back into the original system, and the system slowly works to reach its intended output after more inputs are given.  This is called a “feedback loop”, and an example of a basic control system is below:

Now…these guys are used everywhere.  One easy example can be seen when you drive a car and your brain takes in visual feedback.  When you press the pedal of the car (the input), the car (our system) moves at a certain speed and the dashboard translates the output into visual feedback.  Our brain (which measures the difference on the intended and actual output) then looks at the dashboard; after, we either press the pedal harder or lighten up until the speed displayed on the dashboard aligns with the speed at which our brain has determined we want to move.  So, next time your brain decides it should pass that wonderful car moving 35 mph on the highway (sums up my afternoon), you have a great model to explain how you go about that pass.

And that’s a wrap.  So what’s the take home message?  Well…life has a lot to offer.  And when you’re just moving through the paces and not taking the time to reflect, we get a lot of the left side of the picture and not the right.  As I’m finishing up college and dealing with everything school has to offer, I’ve realized that I have been letting things slip and not grasping and treasuring everything that I used to.  This is why I’m back writing- so that I can take a second to pause and place down on paper (or my computer) these words, and relay these messages to you so that you may also pause and reflect on the great things that have happened in your life.  And hopefully we can share these memories, creating our own little feedback loop, and enjoy this beautiful thing called life together.

3 thoughts on “The Problem with My Memory”