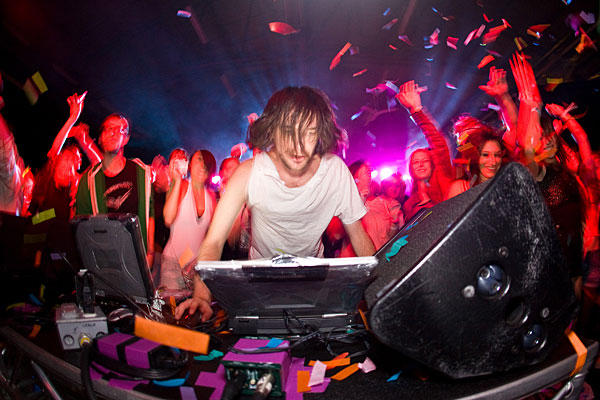 I’m usually not good at girl talk (obviously), so you’re probably wondering why I’m writing about Girl Talk.  Actually, I should note, we’re not going to talk about girl talk like this girl talk:

We’re going to talk about Girl Talk.  Girl Talk looks like this:

Girl Talk is actually Gregg Gillis.  Now if you’re unfamiliar with Gregg, you’d be surprised to know that it’s likely you’ve heard some of his work.  Or really some of the work that he uses.  Girl Talk is a mashup artist from Pittsburgh, Pennsylvania.  Mashup is a type of music that evolved in the late 1990s.  What mashup artists do is actually steal other artist’s work…in a sense.  Mashups are songs that are created by taking the vocal part of one song and putting it on top of (called ‘overlaying’) the instrumental track of another song.  For instance, if I were to take the beautiful song ‘Jigglin’ by the Ying Yang Twins and combine it with the ever-so elegant ‘Can’t Stop’ by Red Hot Chili Peppers, I’d get this: mashup (I made this in 10th grade with a friend, don’t laugh).  Simple, right?

But, creating mashups are actually quite complex.  It takes a lot to overlay tracks at the same bpm, key, get the right volume on the tracks, and then mix all of these samples together into one song.  And Girl Talk has done a pretty good job at it thus far.  Actually, he’s become one of the most famous mashup artists in the world, and it takes a special mind to do something like this.  Well…it takes the mind of an engineer.  See, before becoming a mashup artist, Girl Talk actually went to Case Western to study Biomedical Engineering (hey that’s what I do), with a focus in tissue engineering.  And, funny thing is, even after becoming an artist Girl Talk stuck with his engineering work.  Until 2007, Girl Talk worked a day job in an engineering company where he created medical devices before focusing solely on music.  He actually even kept his ‘night’ work secret for quite a bit, by not allowing Pittsburgh papers to publish his real name next to his stage name.

If you want to learn more about Girl Talk, you can find his music here: Girl Talk.  He usually posts his music online for free (which is pretty cool…though of course I’m not a proponent of getting music for free off the internet), so you probably won’t have to look too hard if you actually want to download it.

So the mind of an engineer can evolve to become a revolutionary music artist.  Now, maybe you wouldn’t call Girl Talk’s music beautiful, but he is pretty talented.  For me, that’s beautiful enough.