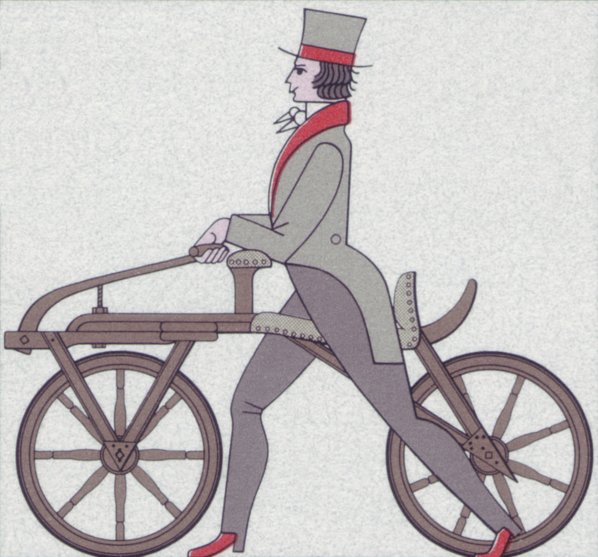 This one’s a little weird.  It’s about using things…unconventionally.  Unconventional inventions are nothing new to nerdy engineers likes us though.  For instance in 1905, 11-year-old Frank Epperson accidentally left a wooden stick outside sitting in a cup of soda.  That night, the temperature dropped below freezing.  He came outside the next morning and removed the soda+stick creation, which later became known as the popsicle.

Velcro was invented in 1941 by George de Mestral after getting annoyed at the burs of the burdock flowers that kept getting stuck to his jacket and dog’s fur.  He ended up looking at them under a microscope and noticed they resembled tiny hooks.  And thus, the velcro Air Jordan’s were invented (obviously):

Bicycles were the first human invention to move people using a two-wheeled object.  Originating from the ‘Dandyhorse’ (yes, they really named it Dandyhorse) created by Germany’s Baron Karl von Draise, the vehicles were a response to the large death of horses that occurred due to crop failure in 1816.  But of course, the invention of the bicycle actually comes from years of innovation.  Bicycles are ruled by the laws of physics.  To not get into anything too mind-numbing, when I pedal on a bike, the chain causes the back tire to rotate forward, giving it an angular velocity.  In turn, the back tire pushes backwards on the ground.  We know by Newton’s third law that if you push on something, it’ll push back on you.  Therefore, the bike and the ground create an ‘action-reaction’ pair: the bike pushes backwards on the ground, and the ground pushes you forward.  Yes, there’s actually a little more that’s involved in the process, but you get the gist.

But…recently, someone else found a different way to use a bicycle.  A composer called Johnyrandom decided to turn one of his favorite inventions into a musical instrument…and it worked pretty well.  By doing things such as hitting the rims with mallets, grazing the chain with a slide, and bowing the brake cables, Johnnyrandom created an entire music-soundtrack-esque composition with a bicycle.  You can check a sample out here, and even buy his single on iTunes for only $1:

The single is titled ‘Bespoken’, and I would have never guessed that the sounds were created from a bicycle because they end up sounding beautiful on their own.  The fact that you can create music from everyday objects, invented for completely different purposes, is kind of amazing.  It shows that looking at things in an unconventional manner is the first step to innovation, newfound creativity, or in this case, art.

So next time you’re riding a bike, or drinking an ICEE, or maybe playing basketball, take a moment to pause and think about how your food or your shoes exist.  Think about how you can be unconventional yourself, and maybe I’ll be looking through the world in your eyes as I use your invention 50 years from now.  Now that’s something beautiful to think about.